Just a Reminder: Men Who Dress in Women’s Clothing are Still Crazy

June 16, 2020
From a New York Times article a while back.....
”In a finding that could be especially sensitive, the researchers found that whether someone ever engaged in same-sex sexual behavior showed genetic correlations with mental health issues, like major depressive disorder or schizophrenia, and with traits like risk-taking, cannabis use, openness to experience and loneliness.”
I think it’s a safe bet that trannies are at least as correlated with insanity as homosexuals are.
So, thanks to the recent Supreme Court ruling, Americans no longer have the right to disassociate from people who are mentally ill.

Some Thoughts on Fisher On Trump's Anti-Semitism Order

December 17, 2019
Max Fisher's December 15th article for The NYT is an interpretation of Trump's Order (read it here before proceeding) on Combating Anti-Semitism as seen through the liberalist lens. It's not all bad I suppose. I think the most I can say for the article is that Mr Fisher has given us another place from which not to reliably get one's history or a serious analysis of things, namely from Mr Fisher.

His piece is typical for the modern left. It's an opportunistic, uncharitable and rigid rant against the current enemy du jour, our president. The reality is that all Trump has done is to exploit the 1964 Civil Rights Act for a bit of political benefit. Time will tell if it pays off I suppose.

Fisher kicks things off with a claim that "such preoccupations with identity have animated not just the Trump administration but much of the global populist backlash." Fisher puts his myopia on full display with this claim when finding such things among his ilk on the left i…
Read more

February 05, 2018
Two things bug me the most in discussion; undisclosed loyalties, and poorly-defined terms.  The former makes for dishonest interactions because whereas one side is having a debate with a peer, the other side might be seeking to win ground in a battle as part of a larger war, and the latter makes for what-amounts-to an idiotic bought between children.  In this essay, I shall seek to offer a way out of such frustrations.        I’m bothered when called-for concessions aren’t made, and specifically at how religious the multicultural left is.  Like a wife approaching her golden anniversary, I find it terribly galling at how stubborn my mate can be.  You can lead a lefty to a conclusion, but you can’t make him stop emoting.  I can’t explain why, but I feel driven to carve out of thought narrow-bands of hypotheticals and reasoning that might, given the most gracious loony-lefty interlocutor (if such a creature exists), cause a moment of ideological insecurity.  I seem to be the only…
Read more 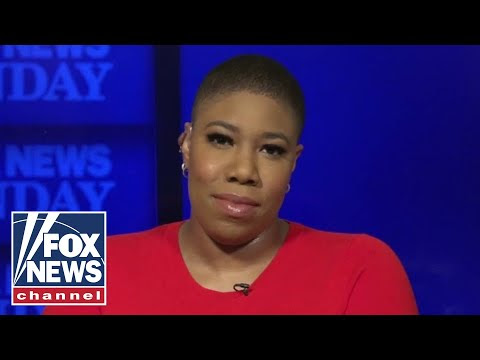 Is it OK if I ask if Symone Sanders is transgender? She (he?) looks to have the shoulders of a linebacker.....